Are you serious about learning Self Defense? Are you still believing in the MYTHS that after you train sparring in classes and you'll be able to execute your self defenses on the streets?

1。Self Defense is NOT about sparring or tournament style fighting jumping in and out trying to locate the best target to strike, launching high or fanciful kicks or grappling the opponent onto the ground and locking each other as if two snakes mating. It's about the ability to deal with hostile physical conflicts encountered during our daily life and the ability to end a fight within seconds upon engagement and leaving the scene safe.

2。Self Defense is NOT JUST about hand to hand combat or dealing with single opponent. You could be fighting with someone who would just grab a glass bottle, a pole, a helmet, a bicycle chain, a sharp pointed object or sharp cutting knife against you. It may also be a situation whereby you need to deal with multiple aggressors !!!

3。Self Defense is NOT about fighting with someone of your same physique, same strength, same weight categories, same gender etc... In all physical confrontations, it's NOT about which technique you used against your opponent's strikes. It's first about being able to handle his forces else your defense will be destroyed and balance lost, these would end up disastrous for you.

​So how would you deal with such situations and return home safe? Training has to be geared and designed to enable you to acquire such skills and abilities, not just physically but also mentally. If the above makes sense to you, you'll NOT be disappointed.

Singapore Wing Chun Academy is the only school openly teaching Wing Chun of the Sum Nung lineage which is also commonly known as the Guangzhou Wing Chun.

Students will be given a variety of opportunities to learn and develop new skills each class. Wing Chun training involves solo practise, partner drills and realistic street fight combat scenario training. The rate of progression in the art depends on individual's understanding and personal fortitude.

The entire course will take approximately 4 - 6 years to complete the syllabus; time taken and proficiency depend largely on one's progress and diligence. Students who wish to attain instructor qualification must attend the Instructor Certification Course conducted and certified personally by Sifu Johnny Song. Certification will be carried out at the Guangzhou headquarters.

Photography & video filming will be conducted for learning purposes, to keep track of progress and for use as the school's publicity and advertising campaign. Students must agree to be photographed, filmed and permit his/her appearances in the photographs and videos to be publicly posted in any social media. The photographs and videos taken shall remain the property of Singapore Wing Chun Academy and students shall under no circumstances claim possession rights to these materials.
​ 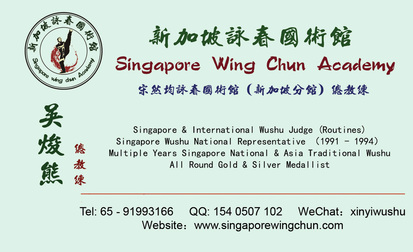