Singapore Wing Chun Academy is the only Wing Chun school in Singapore openly teaching the Sum Nung system in this art. Apart from the typical 3 hand forms, Wooden Dummy, Double Knives and Long Pole, there's also a module on 12 San Sik which comprises the most commonly used techniques. These techniques can be trained stationary or with shifting and advancing footwork. After this module, students will embark onto the San Sao module which gears students towards dealing with realistic street combat. This module includes few drills which enable students to explore the applications of the techniques to reach their maximum efficiencies and accuracies at combat speed and power. 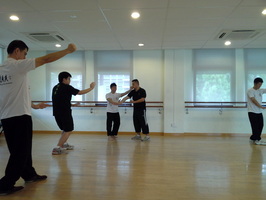 The 12 San Sik (Twelve Techniques Form) were organized by Grandmaster Sum Nung based on the san sik taught to him by both his Sifus, Cheung Bo and Yuen Kay San.

Compact in structure, yet containing many of the elements essential to good Wing Chun  development, the 12 San Sik are ideal for early training. They can be loosely grouped into three broad categories. The first four focus on building body structure through basic punching, standing, turning, and stepping drills. The next four work fundamental arm cycles and changes, firmly ingraining the cardinal tools for interception and adaptation. The last four include sensitivity training and combination techniques.

Although perhaps not as detailed as the techniques of in the three classical Wing Chun forms, these same attributes make them quite valuable as a sort of crash-course in Wing Chun self-defense. For those who require simple skill, yet do not have the time or desire to delve more deeply into the art of Wing Chun, the 12 San Sik can serve as great starting point.

Training is accomplished through the solo forms and practicing with a partner in both san sao (combat drills) and chi sao (sticking hands). Each point is trained individually and in combination, to be used in application as circumstances dictates.

Here, imagine this - someone throws a punch at you and you deflect the punch with a Pak Sao (palm deflection) using the parallel or same side arm. Now, not that you are going to do this in a fight, shut your eyes, when you feel the punching arm you have contact with withdrawal, you know can feel that the next attack is on its way. Through contact reflex training practice, you will be able to feel more each training session. You will soon see that once you have contact, you can fight blind without a problem.
It is also important to understand how to redirect and deflect incoming force and to understand the principle of stepping off the line of force. In this way you do not have be larger or stronger than your opponent to overcome him. Some situations may require control of your attacker. In survival situations you will need to depose of your attacker quickly and effectively.

Random battle set training covers these important concepts as well as developing your flow of protective retaliation. Mouth pieces are recommended during these sessions.

Chi Sao is not a form of sparring. Utilizing Chi Sao as sparring totally defeats its purpose. Chi Sao is used to develop contact reflexes or trains the ability to interpret movement through touch. The skills one obtains from Chi Sao will greatly enhance your ability to defend yourself.  When this absence of contact is lost the opportunity to attack maybe present. 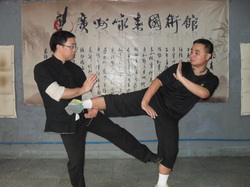 Kicks can be explicitly found in the Chum Kiu and Wooden Dummy forms. Traditionally, kicks are kept below the waist. This is characteristic of southern Chinese martial arts in contrast to northern systems which utilise many high kicks.

Wing Chun kicks are performed striking with the heel. Kicks may be executed with the body square or at an angle pending on the opponent's position. At short distances this can become a knee strike. There are generally 5 kicks in the system namely the Front Kick, Side Kick (Mid & Low), Crescent Kicks (Inward & Outward) and Stop Kick.

Every kick is both an attack and defence, with legs being used to check incoming kicks or to take the initiative in striking through before a more circular kick can land. Kicks are delivered in one movement directly from the stance without chambering /cocking.

Chi Geork or Sticky Legs is Chi Sao of the legs version and plays a vital aspect in the concept of base disruption. Chi Geork trains your ability to use your legs in a close range as well as developing one's balance.