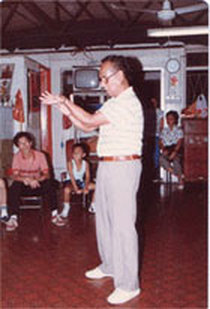 Sum Nung had already been learning wing chun kuen for many years when Dr. Wai Yuk-Sang called him. Dr. Wai had been in service of the Nationalist Army. He had learned wing chun kuen from the classmate of the young man's current teacher, Yuen Kay-San, had taught the art to the young man's first teacher, Cheung Bo, and had taught medicine to the young man personally. He had been famed for his skills as a doctor and his skills as a fighter, especially his amazing talent with the gold coin darts. That was then. Now, the old man had had a change of heart, a change of life. He had shed his former existance, embraced the teachings of the Tao, and become a priest. When Sum Nung answered Dr. Wai's call, he found his martial grand-teacher deeply concerned. Dr. Wai had come to regret having taught the martial arts. He felt that what he had passed on may be used to harm or even kill others and that thought his new-found faith could not bear. Sum Nung tried to reasure his grand-teacher, saying he had never, nor would he ever, gravely injure, let alone kill anyone. Dr. Wai knew this and took a measure of comfort in it, but pointed out that as his art was passed down and more and more people learned it, it became impossible to know what may eventually happen. Although Dr. Wai knew he could not unteach what he had already taught, he did think that perhaps he could help balance the scales. Hence, Dr. Wai taught Sum Nung the kidney breathing returns to source set and instructed him to perform it both before and after his wing chun kuen practice, so that the art of fighting would always be contained by the art of healing.

Sun Hei Gwai Yuen (shen qi gui yuan) are a seldom seen part of the wing chun kuen passed down by Grandmaster Sum Nung. Sun refers to the kidneys. Hei (qi/chi) is a deep character covering breathing and intrinsic energy. Gwai Yuen can be translated as invigoration, returning to the source or recharging the source.

The kidney breathing exercises are rumored to have come originally from the Emei mountain temples of Sichuan province (where fables also link back the system as a whole to the legendary White Crane nun, Ng Mui). In modern times, they were passed down by Dr. Wai Yuk-Sang. Formerly a doctor in the service of the Nationalist Army, Dr. Wai learned wing chun kuen from Ngau Shi of the Kuaizi Street Meat Market, a student of Fung Siu-Ching. Late in life, Dr. Wai became a Taoist priest and passed along the kidney breathing exercises to his grand-student, Sum Nung.

It is said in wing chun kuen that one must "eat well and moderate lust; quiet the heart and conserve the hei ". While these ideals are all fairly typical in the Chinese martial world, and the first three are pretty self-explanatory, one may wonder how does wing chun kuen specifically go about working hei?

Wing chun hei gung (qigong, breathing/intrinsic energy work) is not a singular phenomenon. Different branches of wing chun kuen, as may be expected, view hei gung and its training in different ways. Some, like the Sum Nung branch have forms in addition to the usual boxing, dummy, and weapons sets to train hei gung. Others prefer to focus exclusively on the sets and see no need for separate hei gung forms. Neither approach is in and of itself better then the other, but by knowing the differences, practitioners can make up their own mind, based on their own needs.

Protecting arm from siu lien tao and expanding chest from sun hei gwai yuen shows the difference between the boxing and hei gungpositionings.In the boxing sets, it is often thought that the slow movements are especially good for hei gung. An example would be the little first training's (siu lien tao) three prayers to Buddha (saam bai faat) section which focuses on the slow extension and retraction of bridges through dispersing (tan), controlling (fook), and protecting (wu). In the end, however, it could be said that all movements of all forms provide some benefit in this area.

Why, then, are there separate hei gung forms in some branches? Simply because, to achieve its great results as a martial art, wing chun makes use of certain specific body structure ideas and methods of motion. The kidney breathing exercises give the practitioner a way to step outside this model and perform movements not contained in the forms, but desirable from a hei gung standpoint. It also means a practitioner does not have to alter the structure nor sacrifice the reflexes they develop within the forms simply to gain some extra hei gung benefit.

In Traditional Chinese Medicine (TCM), the kidneys are important for several reasons. They store the body's jing (prenatal qi), governing birth, growth, and development. They produce marrow, nourish the brain, and control the bones. They govern water passage and receive the qi (as in breathing). They open into the ears, manifest in the hair and house zhi (will power), They are the gate of ming (vitality) and the source of the original qi and fire of all the internal organs, warming the lower burner, and harmonizing sexual function. It is this importance that leads to exercises like the kidney breathing.

A form of yit gan (yi jin, tendon changing), the kidney breathing exercises put a practitioner through a good range of motion in order to improve health. In terms of martial benefit, it is know that when Sum Nung trained the exercises, he achieved a form of body resilience. Yuen Kay-San pointed out, however, that even an iron hammer, struck repeatedly, would wear down and the body was far more valuable than a hammer. Thus, while present, the already effective fighting concepts of wing chun kuen as a whole lend the health aspects of the kidney breathing a greater import than any martial benefits.

The kidney breathing exercises are composed of a sequence of a half-dozen or so short forms intended to be performed both before and after wing chun kuen training, to replenish and re-vitalize the practitioner. In terms of their place in the system as a whole, the author and his classmates learned them following the wooden dummy and prior to weapons.

As with most things in wing chun kuen, there are some variations in transmission of the kidney breathing exercises. Some perform all of the exercises separately. Others prefer to link the exercises into one long form and practice them together in that manner. Names and orders also sometimes vary from time to time and teacher to teacher. With that in mind, the following is a list of the sun hei gwai yuen as the author remembers learning them.

Rising arms begins by expanding the whole body vertically, from toes to fingers. Yielding breath works on stretching the whole body in a slightly different way, bending the wrists backwars. This form is often used to link the others together when practiced in sequence. Side-to-side waist turns the hips and torso of a practitioner, working the waist (an important component trained for power in the boxing system) in a horizontal manner. Side diaphram bends, works the waist and also involves stretching the intercostal muscles (used heavily in the sinking and rising methods of wing chun kuen). Single hoof, so named because it focuses on one hand at a time, is almost identical to the threading exercises seen in systems like baguazhang. This helps work the flexibility of the bridges and the balance in conjunction with the backwards and forwards movement of the waist. Expanding chest serves to fortify the chest which is often "sunken" in wing chun kuen boxing, stretching through the pectorals and shoulders, and continues the whole body work of the yielding breath. Dropping power is also seen in the hei gung of other arts. The skyward reaching of the arms, combined with a complete squatting and rising of the legs, works the entire body and end the series with the practitioner feeling fully invigorated. Overturning arms completes the body of the exercises, reaching out and over in the horizontal plane. Following this, both the back and the dan tian are usually stimulated.

The single hoof is one of the most interesting of the kidney breathing exercises. Primarily involving the arms and waist, it takes the practitioner through an extensive range of motion, twisting, stretching, and revitalizing the area.

Begin with the feet shoulder width apart, arms down at the sides, and the body and mind relaxed and centered. The feet should be connecting the horse firmly into the ground through the kidney-1 point (approximately 1/3 of the way down from the toes), with the toes slightly gripping the ground. The joints bend naturally, free from tension. The anus should be tucked in and the tongue lightly pressed against the roof of the mouth to complete the body's hei connection. Breathing is deep but natural

Although not vital to the exercise, typically an item like a teacup or small bowl full of liquid can be used to aid in keeping the palm level and the eyes focused. The bowl should be allowed to rest on one extended hand (in his case the right), while the other arm stays retracted to the waist.

To begin the exercise, the right hand moves forward and outward in a smooth circle. The eyes begin with, and maintain their gaze on the bowl (or the hand if no bowl or cup is used). The waist turns slightly with the motion and the other hand remains at the waist. The body stays rooted, and the breathing natural.

Typically, 7 repetitions are done for each exercise. When training is completed, the hands are again lowered to the sides.

Among the better known individuals fortunate enough to have learned from grandmaster Sum Nung (with apologies, far too many to list here completely) are Sum Jee, Leung Dai-Chiu, Ngo Lui-Kay (Ao Leiqi), Kwok Wan-Ping, Lee Chi-Yiu, Wong Wah (Tom Wong), and many others.

About the Author: René Ritchie has been studying the Yuen Kay-San style of Wing Chun under the guidance of Ngo Lui-Kay since 1990. This article is excerpted, in part, from his book, Yuen Kay-San Wing Chun Kuen History & Foundations. René Ritchie is also co-author, along with Robert Chu and Y. Wu, of the book Complete Wing Chun: The Definitive Guide to the Historical Traditions of Wing Chun Kung-Fu and has written articles for Martial Arts Masters, Martial Arts Illustrated, and Martial Arts Legends magazines and the Wing Chun Today newsletter. Creator of the Internet Wing Chun Kuen website, and is co-administrator, along with its founder Marty Goldberg, of the Internet Wing Chun Mailing List. He works and practices in Eastern Canada. Special thanks to Robert Chu for sharing his knowledge of TCM for this article.